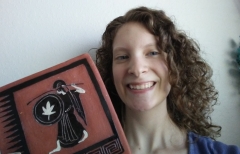 Alisha Sanders is a third-year Ph.D. student specializing in ancient Roman art and architecture. She received a B.A. in Art History from Bowling Green State University, graduating with University Honors in 2016. Her undergraduate thesis examined the potential spreading of political and religious ideals through the use of archaistic influences in reliefs and statues during the reign of Augustus Caesar. In 2018, Alisha received her M.A. in Art History from the University of Iowa. As a continuation with her interests in the art and architecture of the early Roman Empire, her master’s qualifying paper examined the architectural and decorative components of the Eumachia Building in Pompeii and their engagement not only with the Augustan artistic ideals permeating the town from Rome but also with other Pompeian buildings. Her master’s research strengthened her interests in female patronage of public architecture and the movement of artistic and cultural ideas between Italian sites. One theme of the qualifying paper that is now a focus of her Ph.D. research interests is how public buildings patronized by women physically and visually interact with other structures within an urban landscape, creating stylistic and conceptual connections that affect the overall urban environment.