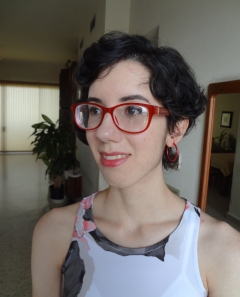 Isabel Baldrich is a PhD candidate in eighteenth- and nineteenth-century European art. Her dissertation, which is tentatively titled “Caribbean Stain: Erasure and Creoleness in Parisian Art,” examines ethnic omissions in selected eighteenth to nineteenth century French paintings. This research addresses ethnicity as integral to our understanding of French colonialism and the concept of race as depicted in French paintings by Anne Louis Girodet, Marie Guillemine Benoist, Théodore Chassériau, Guillaume Guillon-Lethière, and Paul Gauguin. Her study will recognize for the first time the Creole heritage prevalent in models and how they complement our perception of Martinican, Guadeloupian, and Haitian subjects. By acknowledging the French Caribbean’s role in French colonialism, her thesis will provide another layer to Creole artists, sitters, and locations, thereby expanding a budding field in art history that has focused mainly on racial identity.

Isabel graduated Phi Beta Kappa with a BA in Art History and received her MA in Art History both from the University of Iowa. Her qualifying paper, “Black Skin, White Hands: Ambivalence in Girodet’s Portrait of Belley,” addresses the painter’s Portrait du C. Belley, ex-représentant des Colonies (1797) which has garnered both praise and contempt. The portrait has been interpreted either as a racist image or a depiction of issues about race and racism. However, the artwork does not fall on the ends of the black-and-white spectrum. The juxtapositions and contradictions found in the African-born representative of Saint Domingue at the National Convention promoted an ambivalence in a period of political upheaval in France and its most important Caribbean colony.