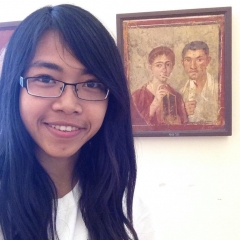 Myat Aung is a first year M.A. student specializing in Ancient Mediterranean Art. She received her B.A. with honors in Art History and Classical Studies from Ripon College. She spent a semester abroad in England, Greece, and Italy, studying the material culture of each country through different cities as visual texts. The first of her two senior theses examined William Blake’s nineteenth-century illustrations of Dante Alighieri’s late medieval epic, Inferno, and how Blake adapted Dante’s work to portray his resentment towards the Industrial Revolution in London. Her second thesis was on the exploration of inwardness in Roman literature, which manifested in Pompeian art and architecture during Rome’s transition from the Republic to the Empire. Her research interests include the artistic and societal relationship between Rome and its provinces, cross-cultural contact between ancient civilizations, and classical reception, the adaptation of classical antiquity in later cultures through various media.