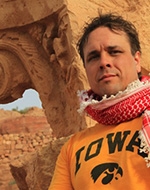 Björn Anderson received a B.A. in Humanities from the University of Oregon, an M.A. in Classical Archaeology from the University of British Columbia, and M.A. and Ph.D. degrees in Classical Art & Archaeology from the University of Michigan. A specialist in the study of material, cultural, and visual interaction in the ancient Mediterranean and Near East, he has taught a variety of courses in ancient art and archaeology. His dissertation focused on cultural identity in the Nabataean capital of Petra in southern Jordan, and his book manuscript is entitled Negotiating Identity in Nabataean Arabia. His articles have appeared in Ars Orientalis and Studies in the History and Archaeology of Jordan, and he has also contributed chapters to several books, including The World of Ancient Persia (2010), the Springer Encyclopedia of Global Archaeology (2014), Political Memory in and after the Persian Empire (2015), The Art of Empire in Achaemenid Persia: Festschrift in Honor of Margaret Cool Root (2017), Arsacids, Romans, and Local Elites: Cross-Cultural Interactions of the Parthian Empire (2017), and the Oxford Handbook of Ancient Arabia (2018).
A member of The Digital Studio for Public Arts and Humanities at the University of Iowa (https://www.lib.uiowa.edu/studio/), he is a member of Levantine Ceramics Project (https://www.levantineceramics.org) editorial board, and teaches courses on the use of digital technology in the study of art.  A trained archaeologist, he has excavated in both Israel and Jordan.  His current field project uses photogrammetry and 3D modeling to reconstruct a tomb façade in Petra, Jordan.